LGBT Pride Month 2021: Here’s what you need to know

June is Pride Month, when the world’s LGBT communities come together and celebrate the freedom to be themselves.

The global landscape for LGBTQ+ rights, protections and acceptance varies tremendously by location, with some destinations attracting millions of visitors to their events like Madrid Gay Pride, Sao Paulo Gay Pride or San Francisco Gay Pride, while more than 70 other countries have laws that allow discrimination or persecution of LGBTQ+ people.

Most in-person 2020 Pride events were canceled because of the pandemic. But parades and other Pride celebrations are returning this month to New York, Paris and many other cities.

Here’s everything you need to know about LGBT Pride Month.

What is LGBTQ+ Pride Month?

The month is meant to recognize the sweeping impact that LGBT individuals, advocates and allies have on history in the United States and around the globe, according to the Library of Congress

How did it start?

In the early hours of June 28, 1969, police raided the Stonewall Inn, a gay bar in New York’s Greenwich Village, and began hauling customers outside. Tensions quickly escalated as patrons resisted arrest and a growing crowd of bystanders threw bottles and coins at the officers. New York’s gay community, fed up after years of harassment by authorities, erupted in neighborhood riots that went on for three days.

The uprising became a catalyst for an emerging gay rights movement as organizations such as the Gay Liberation Front and the Gay Activists Alliance were formed, modeled after the civil rights movement and the women’s rights movement. Members held protests, met with political leaders and interrupted public meetings to hold those leaders accountable. A year after the Stonewall riots, the nation’s first Gay Pride marches were held.

In 2016 the area around the Stonewall Inn, still a popular nightspot today, was designated a national monument.

Where did the Pride name come from?

It’s credited to Brenda Howard, a bisexual New York activist nicknamed the “Mother of Pride,” who organized the first Pride parade to commemorate the one-year anniversary of the Stonewall uprising.

LGBTQ+ Pride Month events draw millions of participants from around the world each year. Typically, there are monthlong celebrations and in-person gatherings that take place across the nation, including pride parades, marches, parties, concerts, workshops and symposiums. Memorials are also often held for members of the LGBTQ+ community who have lost their lives to hate crimes or HIV/AIDS.

The rainbow LGBTQ+ flag is prominently displayed throughout the month. Gilbert Baker, an American artist, gay rights activist and U.S. Army veteran, created the flag in 1978 as a new symbol for the gay and lesbian political movement at the suggestion of his friends and colleagues, including Harvey Milk, a San Francisco city supervisor and the first openly gay elected official in California. Milk was assassinated later that year.

According to Baker’s website, the colors of the LGBT flag each have a meaning: red for life, orange for healing, yellow for sunlight, green for nature, blue for harmony and violet for spirit.

Baker died at the age of 65 on March 31, 2017, though his rainbow flag remains an iconic, powerful symbol for LGBT pride.

This year’s LGBTQ+ Pride Month will be celebrated differently due to the coronavirus pandemic, but after the virus canceled nearly every in-person event in 2020, many are back this year. All 50 U.S. states have started to lift stay-at-home orders and other restrictions imposed to curb the spread of the novel coronavirus as vaccinations increase and cases decrease.

Still, some of the LGBTQ+ events will be a mixture of in-person and online events.

Can I participate in Pride events if I’m not LGBT?

Sure. Pride events welcome allies from outside the LGBT community. They are opportunities to show support, to observe, listen and be educated. 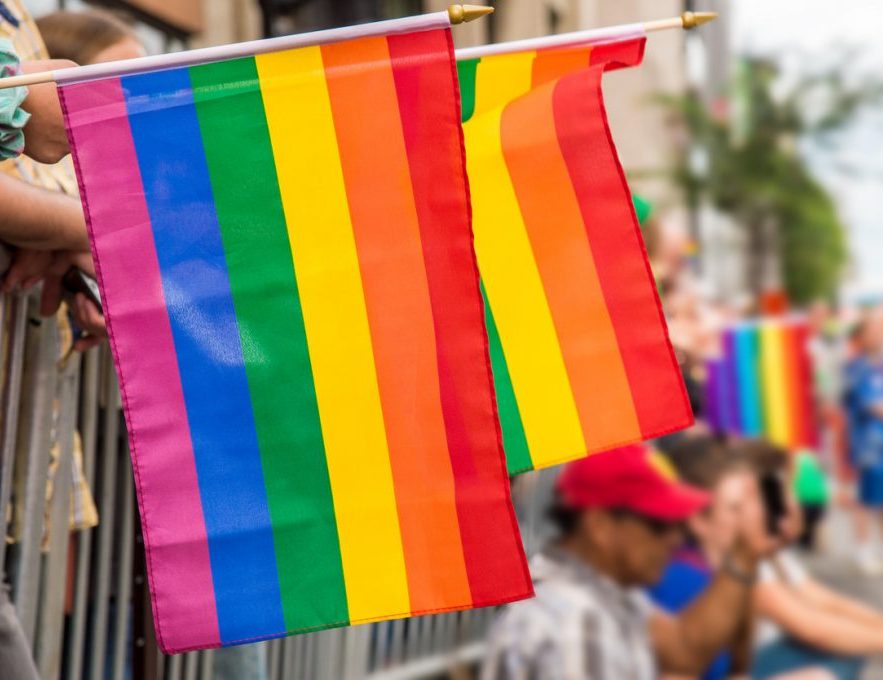